I bought a solar panel from China and three solar-powered garden lights for $0.85 USD each.  I opened up the garden lights, and inside was a really simple circuit with a single chip to boost the voltage from the 1.2V battery to the 3V needed for the LED, and an inductor to control the amount of current that it supplies:

One of the garden lights wasn’t working, so that left me with two.  I cut off the small solar panels from the two remaining garden light circuit boards, and connected them in parallel to the larger solar panel that I’d bought.   I cut off the LED and inductor from the broken board, and soldered them in parallel to a working board’s LED and inductor, respectively.  For the upstairs LED, I actually cut off the white LED and used a yellow LED, just to make it seem more cozy like a bedroom.

I wired it all up, and hot glued everything into place.

And so, the result is three LEDs which light up when it’s dark, and stays lit for several hours (2 days if the cells actually hold 2*600mAh like they say on them, but I don’t believe that value in the slightest). 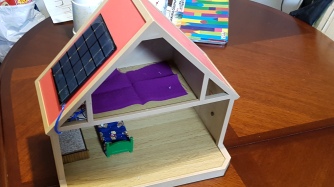 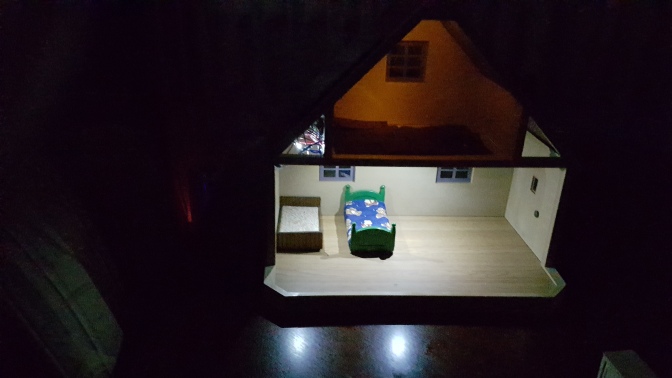