I bought a solar panel from China and three solar-powered garden lights for $0.85 USD each.  I opened up the garden lights, and inside was a really simple circuit with a single chip to boost the voltage from the 1.2V battery to the 3V needed for the LED, and an inductor to control the amount of current that it supplies:

One of the garden lights wasn’t working, so that left me with two.  I cut off the small solar panels from the two remaining garden light circuit boards, and connected them in parallel to the larger solar panel that I’d bought.   I cut off the LED and inductor from the broken board, and soldered them in parallel to a working board’s LED and inductor, respectively.  For the upstairs LED, I actually cut off the white LED and used a yellow LED, just to make it seem more cozy like a bedroom.

I wired it all up, and hot glued everything into place.

And so, the result is three LEDs which light up when it’s dark, and stays lit for several hours (2 days if the cells actually hold 2*600mAh like they say on them, but I don’t believe that value in the slightest).

And so, 24 hours of hardware and software hacking later:

He’s waving only by a short amount because otherwise he falls over 🙂  Took a day and half to do, so overall I’m pretty pleased with it.  It uses 17 MG996R servos, and a Chinese rtrobot 32 servo controller board.

The controller board amazingly provides INCOMPLETE instructions.  The result is that anyone trying to use this board will find that it just does not work because the board completely ignores the commands that are supposed to work.

I downloaded the example software that they provide, which does work.  I ran the software through strace like:

Searching in dump.txt for ttyACM0 reveals the hidden initialization protocol.  They do:

(The TCSBRK  ioctl basically just blocks until nothing is left to be sent).  Translating this into python we get:

(Looking at the strace more, running it over multiple runs, sometimes it writes “~OL” and sometimes “OL”.  I don’t know why.  But it didn’t seem to make a difference.  That’s the capital letter O btw.)

I wanted to have a crude sensor measurement of which way up it is.  After all, how can it stand up if it doesn’t know where up is?  On other projects, I’ve used an accelerometer+gyro+magnetometer, and fused the data with a kalman filter or similar.  But honestly it’s a huge amount of work to get right, especially if you want to calibrate them (the magnetometer in particular).  So I wanted to skip all that.

I want to move quickly on this project, so I decided to give the second way a go.  Before dealing with vibration etc, I first wanted to know whether it could work, and what the latency would be if I just transmitted the Android fused orientation data across wifi (UDP) to my router, then to my laptop, which then talks via USB to the serial board which then finally moves the servo.

So, I transmitted the data and used the phone tilt to control the two of the servos on the arm, then recorded with the same phone’s camera at the same time.   The result is:

I used a video editor (OpenShot) to load up the video, then measured the time between when the camera moved and when the arm moved.  I took 6 such measurements, and found 6 or 7 frames each time – so between 200ms and 233ms.

That is..  exactly what TowerKing says is the latency of the servo itself (Under 0.2s).  Which means that I’m unable to measure any latency due to the network setup.  That’s really promising!

I do wonder if 200ms is going to be low enough latency though (more expensive hobby servos go down to 100ms), but it should be enough.  I did previously do quite extensive experimental tests on latency on the stabilization of a PID controlled quadcopter in my own simulator, where 200ms delay was found to be controllable, but not ideal.  50ms was far more ideal.  But I have no idea how that lesson will transfer to robot stabilization.

But it is good enough for this quick and dirty project.  This was done in about 0.5 days, bringing the total so far up to 2 full days of work.

Cost and Time Breakdown so far

For tools, I used nothing more than some screwdrivers and needle-nosed pliers, and a bench power supply. Around $120 in total. I could have gotten 17x MG995 servos for a total of $45, but I wanted the metal gears that the MG996R provide.

My plan is to hang him loosely upright by a piece of string, and then make a neural network in tensor flow to control him to try to get him to stand full upright, but not having to deal with recovering from a collapsed lying-down position.

Specifically, I want to get him to balance upright using Q learning.  One thing I’m worried about is the sheer amount of time required to physically do each tests.  When you have a scenario where each test takes a long time compared to the compute power, this just screams out for Bayesian learning.   So…  Bayesian Q-parameter estimation?  Is there such a thing?  A 10 second google search doesn’t find anything.  Or Bayesian policy network tuning?    I need to have a think about it 🙂

I put together a ‘lie detector’ testing for galvanic skin response.

I didn’t work.  I tested various obvious different ideas, such as looking at variances from a sliding window mean etc, but didn’t get anywhere.

It does light up if I hyperventilate though, which is er, useful?  It is also, interestingly, lights up when my daughter uses it and shouts out swear words, which she finds highly amusing.  I think it’s just detecting her jerking her hand around though.  She doesn’t exactly sit still.

I used an op-amp to magnify the signal 200 times analogue-y (er, as opposed to digitally..), but I now wonder if I could use a high resolution (e.g. 40bit) digital to analog converter directly, and do more processing in software.

Perhaps even use a neural network to train to train it to detect lies.

I did order a 40bit AD evaluation board from TI, but haven’t had the chance to actually use it yet.

I’ve been trying to introduce my daughter, 6 years old, to electronics.  I started her on the Velleman MK100 Electronic Christmas Tree which went fairly smoothly.

Then we progressed to a Velleman MK127 Microbug which was a lot more difficult.

The problem with these kits is that beginners will make mistakes that will be unable to recover from.  Not only that, but they don’t explain how they work so you can’t debug them or understand what you are doing.

On top of that, the bots can be outright hackish – for example, requiring you to scrap the edge of the motors, and then solder the chasis of the motor directly to the board at an angle!   And this is even more difficult than it sounds, since the motor is highly magnetic and so requires a steady strong hand to keep the soldering iron still.

This was the result: 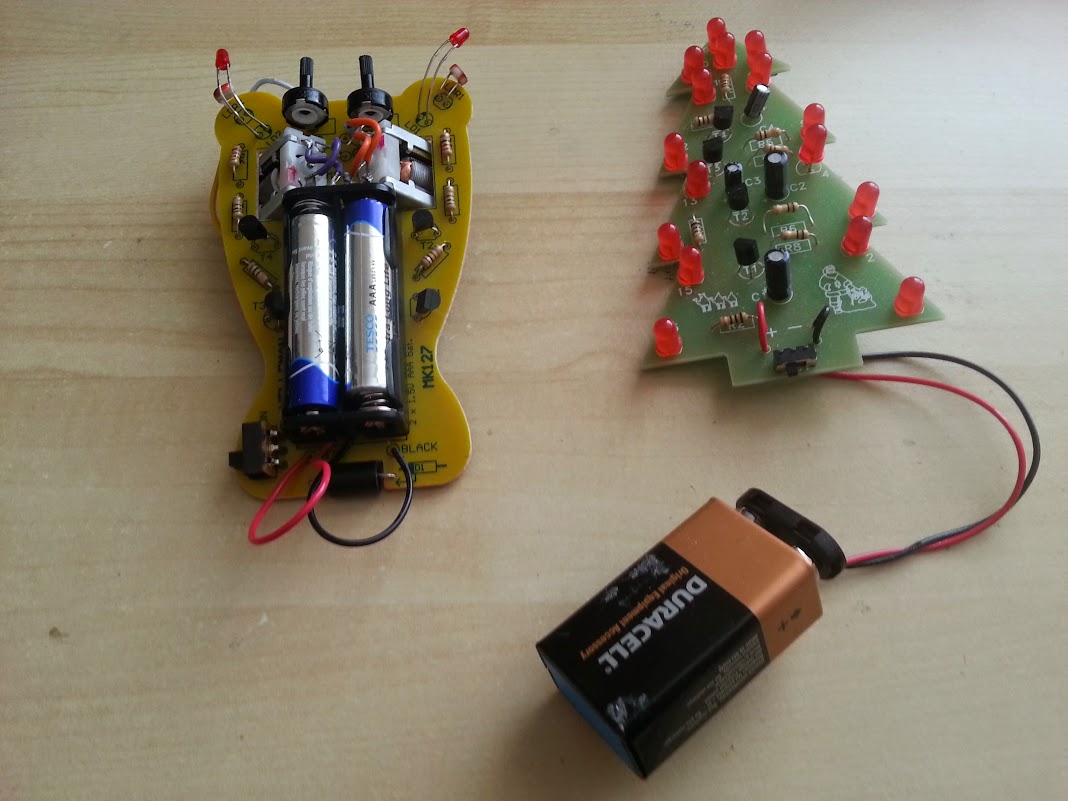 Notice the four wires from the motor. This was because we put the motors in the wrong way around, despite following the instructions. So I had to reverse the motors. This sort of repair is probably beyond a child. But worse: 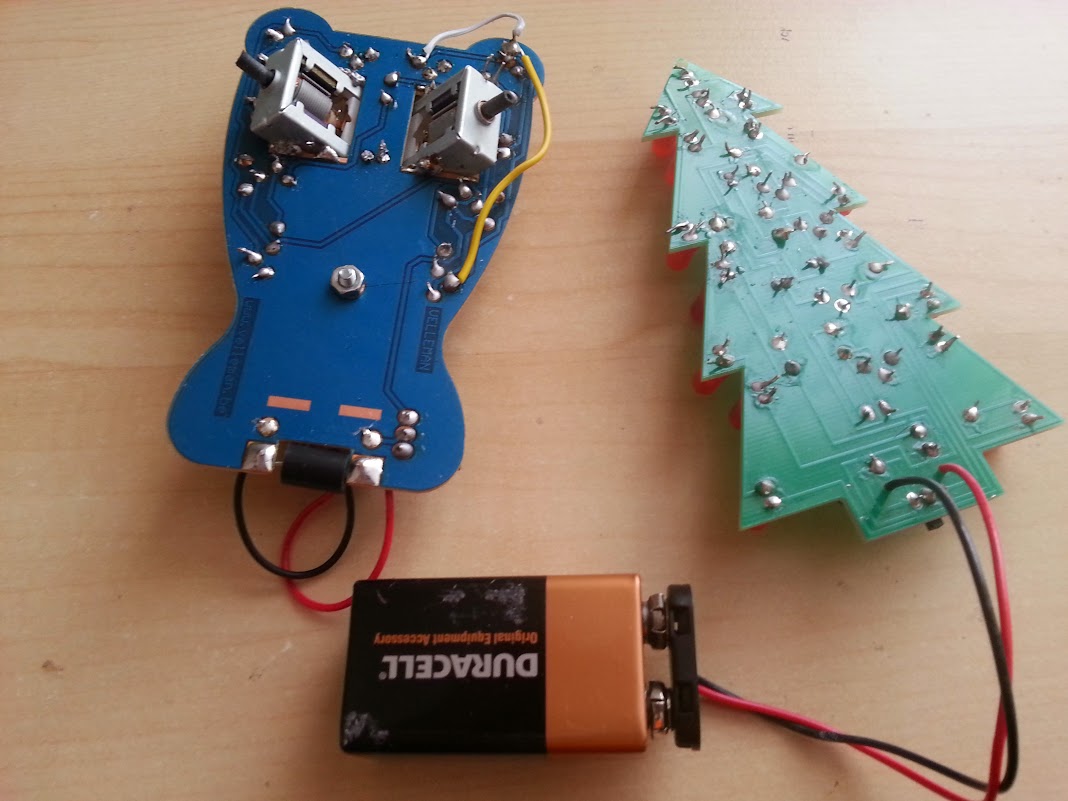 Notice the yellow and white wires? This is another repair job after finding that the light sensitive resistor had broken the bottom of the board and was not making a proper connection. Pretty much impossible to detect this for a novice or if you didn’t have a voltmeter.

I’m not sure what the solution is. In the past I’ve used various non-soldering electronics kits, but they all have their own disadvantages.

This was my first electronics project – a simple self-balancing robot.

The wheels and chassis are from a toy truck.  Onto that I salotaped a breadboard with two Light-Dependant-Resistors, attached in series.  On one end I feed 5V, on the other end, ground.  This gives a voltage divider.  And in the middle I connect that to a resistor and a capacitor in parallel.  This gives me a Proportional Derivative signal (out of a PID controller).

This means that we can read off the current ratio of brightness that the two LDRs see, then add on to that signal the rate at which they are changing.  This helps prevent driving the motors too fast when we already moving rapidly towards the balancing point.

We then read this analog voltage on the Arduino, and use it to control the direction of the motors.

There is a huge amount of gear slop which is why it can only barely balance.